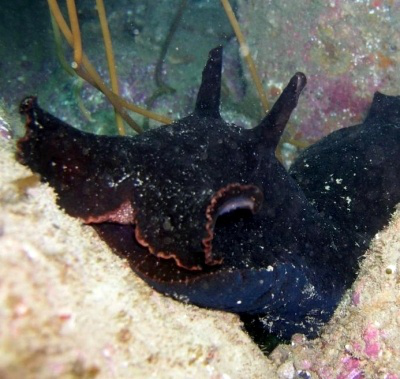 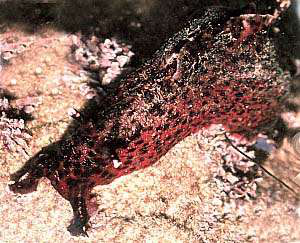 Scuba San Diego Inc’s divers and snorkelers often encounter California Sea Hares and Black Sea Hares during our guided dives and Snorkel Adventure tours.    The California Sea Hare is greenish to reddish brown and  with mottled spots.  They can do something the Black can’t that is, exude a dark reddish purple creamy substance when threatened like a octopus. They also run smaller, up to a few pounds while the Black Sea Hare have been found at 35 pounds.

The Black Sea Hare holds the size record for all Sea Hares. It does not have the ability to exude a cloud of ink like the California Sea Hare.  The Sea Hares are constantly grazing algal material and are found from the intertidal to the deep kelp forest.  The part of their name “vaccaria” refers to this constant grazing aspect and the fact that like a cow they have three stomachs. Their range is from Los Angeles to Bahia de Los Angeles in Baja California.